Sometimes you just gotta show up.

I spent this week in Watts. Watts is a neighborhood in Los Angeles often associated with crime, the historic riots, and gang activity. It’s also a cultural crossroads in L.A. with some amazing people I now call friends.

Several friends came from around L.A. and out of state to join me in seeing something great happen. It was time well invested. I’m working with a friend of mine, Jason and his team, who are engaging in disciple making, house church planting, and creating jobs for the community.

I think the best way to share what happened is to show some pictures and tell a few stories. 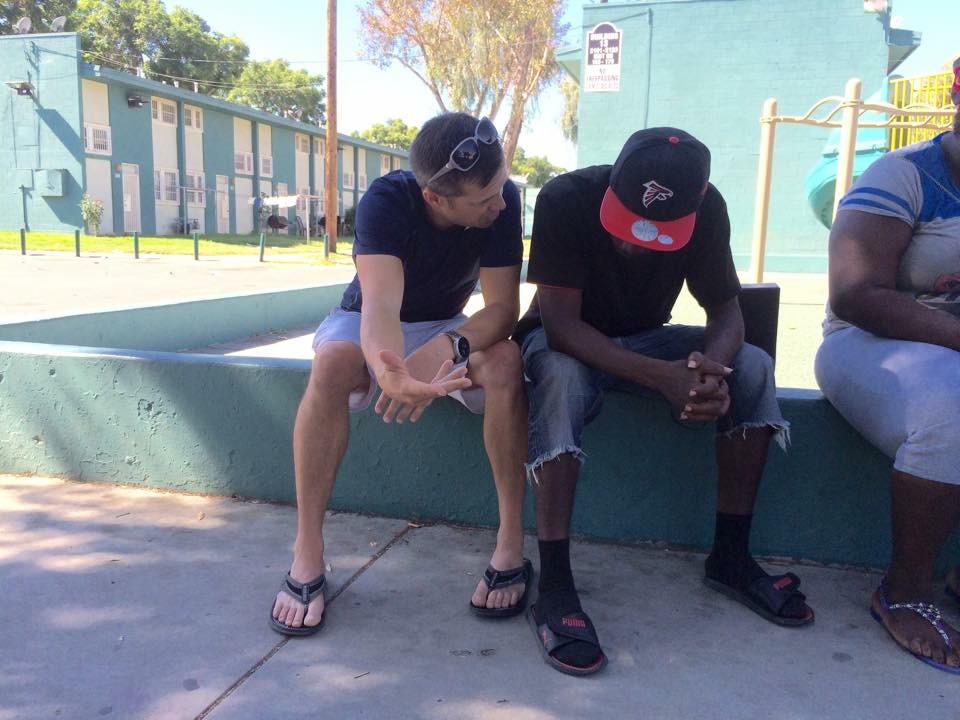 Sharing the good news of Jesus on the streets. The urban core is so unique. People are hanging out and many of them are willing to sit and talk. 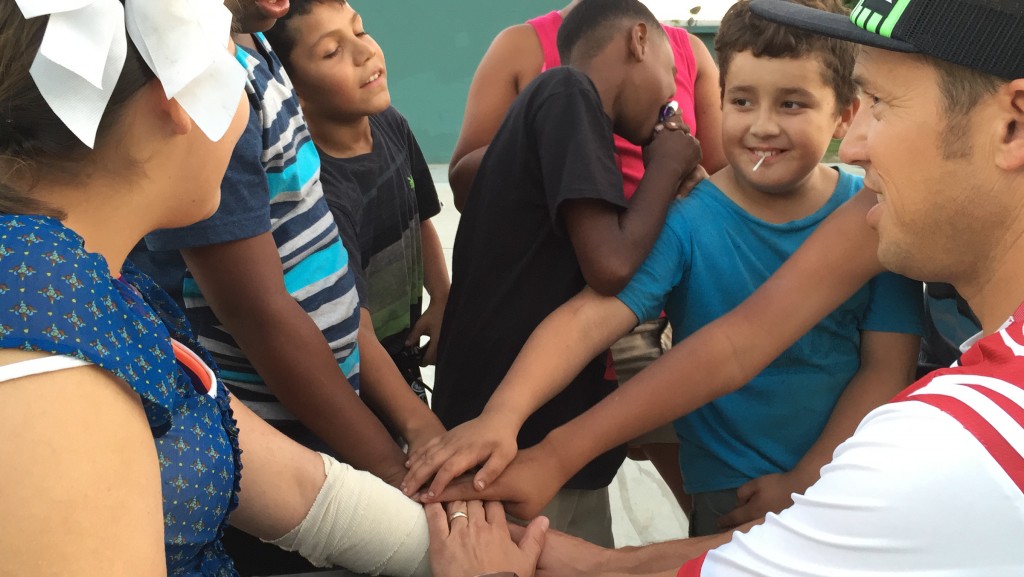 “I feel like God is hugging me right now!” one of these kids said as I prayed with him and seven of his friends to begin following Jesus. I then asked the kids if I could come meet their parents. Some of their parents heard the message of Jesus. One of their parents decided to host a weekly gathering in their home to do the Pocket Disciple experiences. 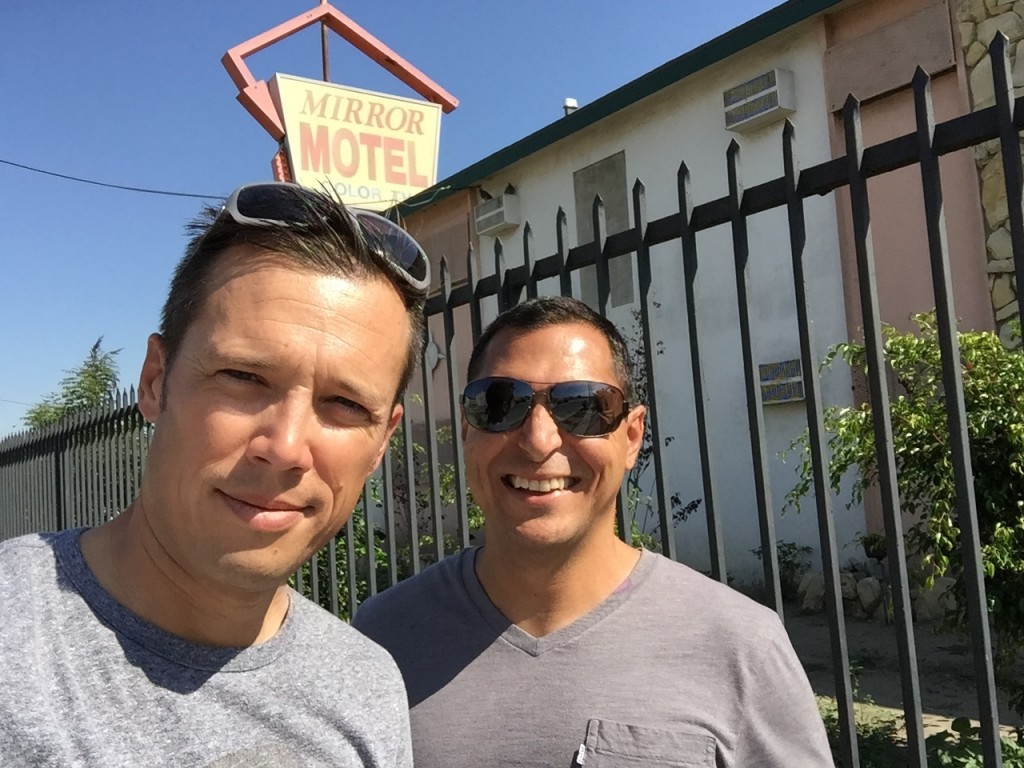 Adam and I went to this local hotel. I’d heard the stereotype of the hotel as a place of frequent prostitution and drug trafficking. I felt scared. Adam felt we should go. So we went. The hotel manager/owner stopped us and asked us what we were doing. We told her we were meeting people and sharing how God can bless them. A short time later, we’d prayed with her to accept Christ, along with another staff worker at the hotel. Both of them experienced the power of the Holy Spirit in a personal way. We came back to this hotel two times for follow up gatherings while they were on breaks. We prayed over the owners (a married couple), asking God’s blessing for them and that the hotel would be transformed by the presence of God. 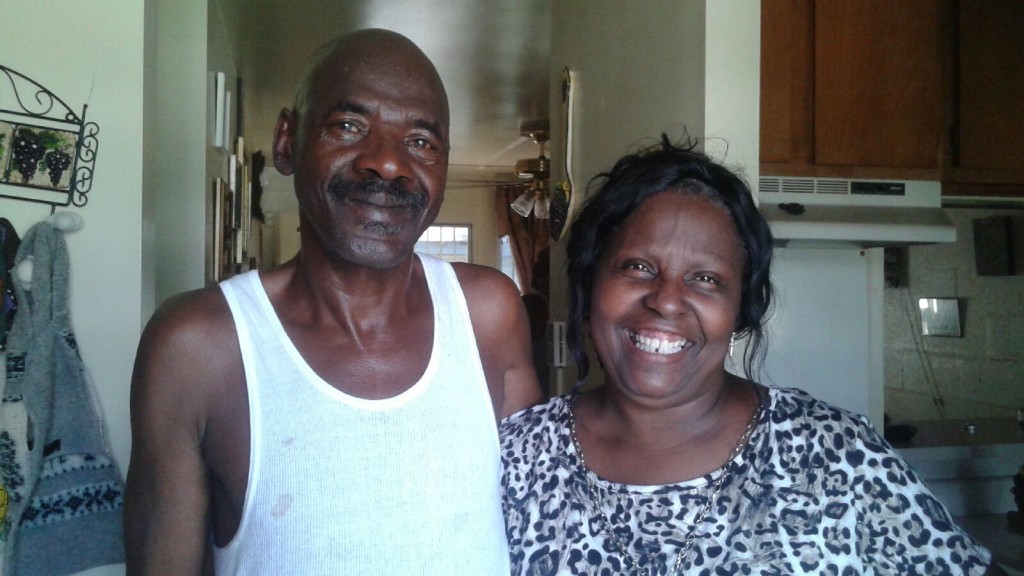 Freddy (right) is one of the most fruitful workers I’ve ever seen. Here she is with Ernest. Ernest had a degenerative disc, stomach, and lung problems. Freddy said, “When we walked in, he was in so much pain. I watched God heal him! He put down his cane and began rejoicing and running around the parking lot! He was so excited he couldn’t even sit down!” (Freddy used to have a $1,000/day drug habit and lived on the streets until Jesus “arrested her.” She now is ablaze with the vision for establishing disciple making movements. She’s personally led over 1,000 people to Christ in the last year alone. Freddy is going to move to Watts for 4-6 months to help establish these new believers into discipling groups. If you would like to join me in supporting her financially as she invests in Watts, shoot me an email or reply to this article.) 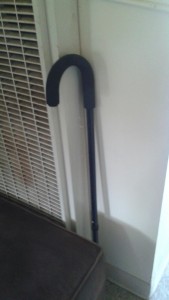 Sometimes miracles happen when you simply obey the words of Jesus and pray for new people you meet when you go to share the gospel. Ernest didn’t need his cane anymore. 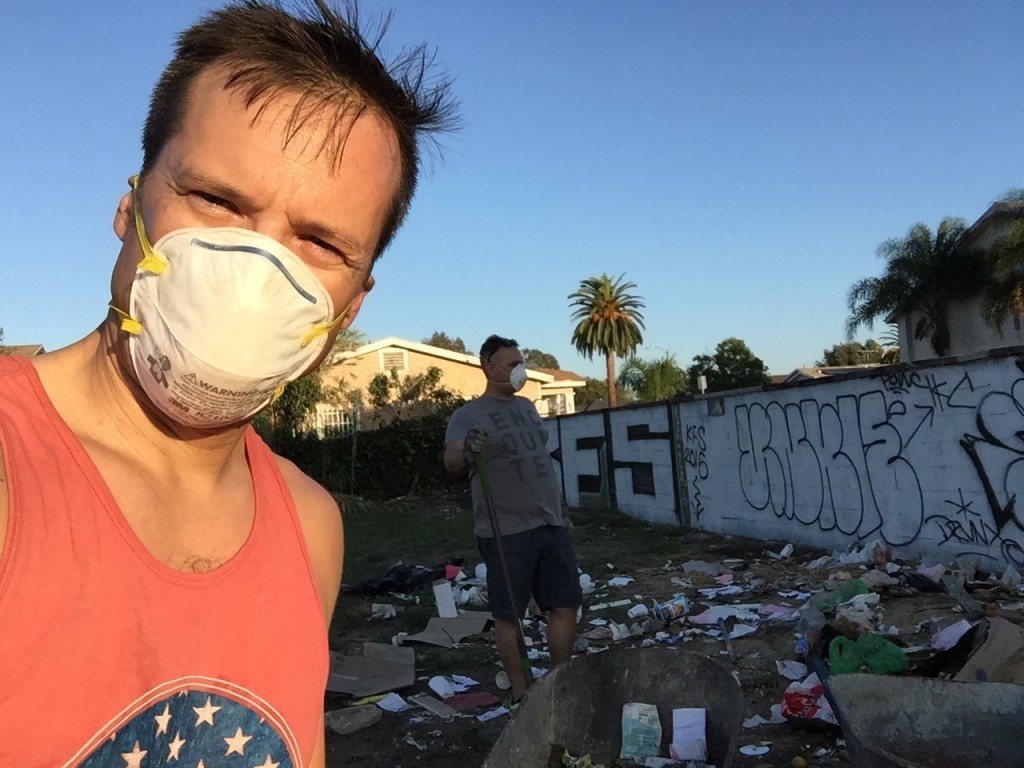 We cleaned up the adjacent lot next to Jordan’s Cafe, a property being rehabbed by my friend Jason to create community and jobs in the community (there are hardly any family friendly restaurants in the neighborhood). On the corner of this lot was a prostitution and crack hut. It was disgusting. We tore it down and cleaned up several tons of trash. The following night we threw a community party on this same lot.

Instead of prostitution and crack, kids and families were celebrating together. 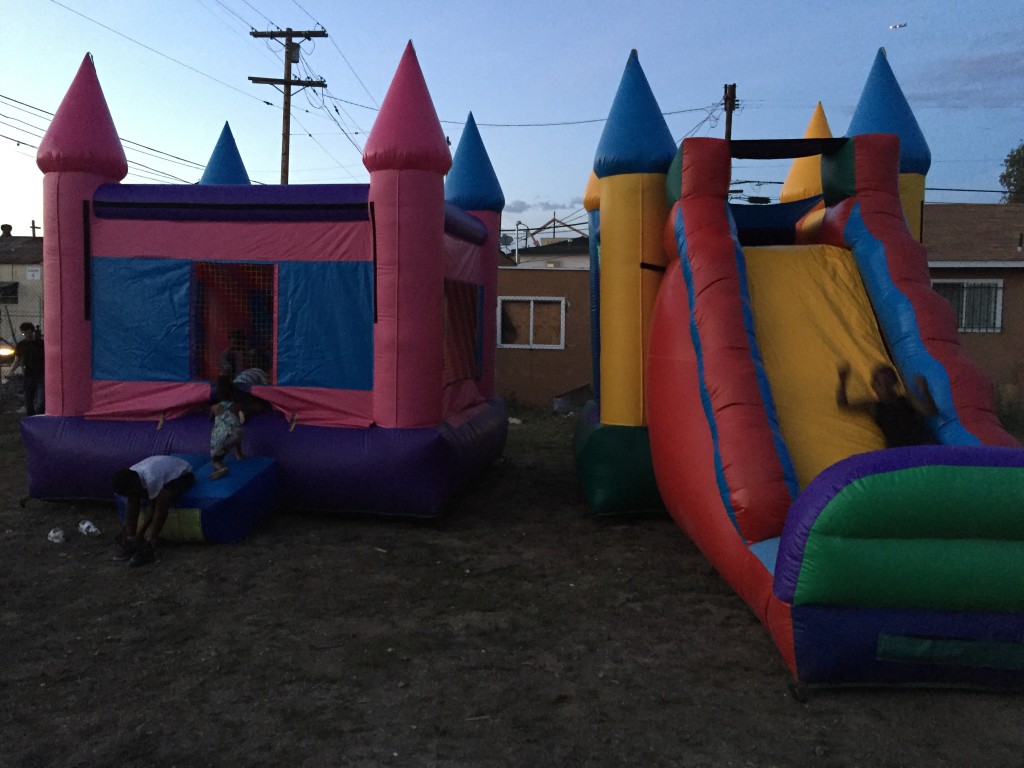 We rented “bouncy houses” for kids in the neighborhood. We invited all the people we’d met so far. We fed people and people played music. It was so much fun.

My friend Hamilton Filmalter shares a short message of the love of Jesus during the party. 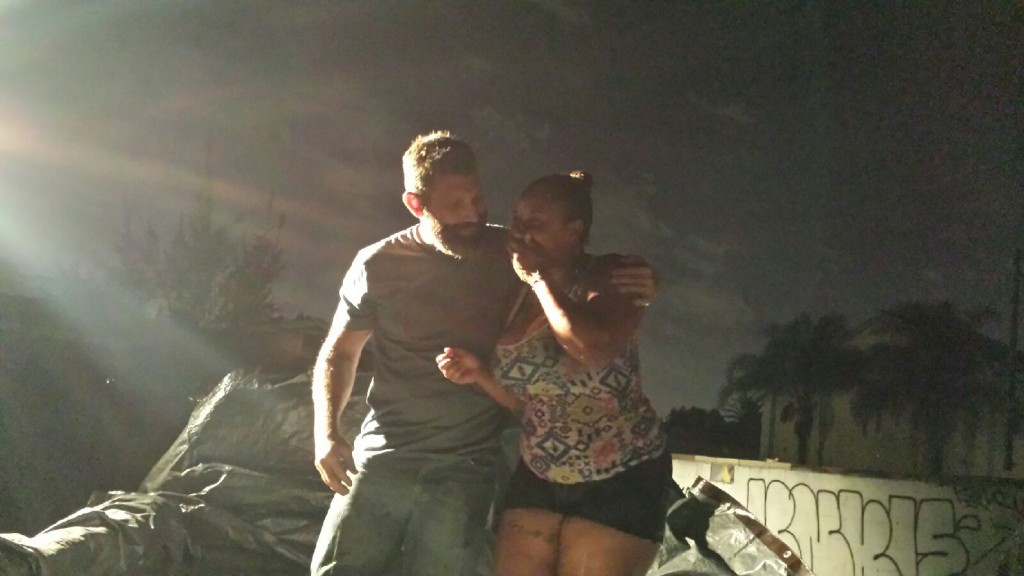 Eight more people became followers of Jesus. This young lady, Nicole, was spontaneously baptized in the back of a truck in which we had laid a tarp and filled with water.

We offered people a “Free 30 minute Bible discussion in their home.” 15 more people signed up. It was great! 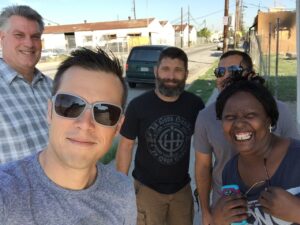 Some of our team hitting the streets. Don Pirozok, Jason Mitchell, Adam M., and Freddy Stoudamire-Howard. Dynamite people to work with.

Over 70 people prayed to accept Christ this week. Many of them experienced subsequent encounters with the power of the Holy Spirit and hosted follow up gatherings in their homes.

Jesus didn’t say to go make converts, he said to “Go make disciples.” My desire is to create movements by leading people to Christ and establishing discipling groups that bring multiplication and eventual community transformation.

Please pray for the awakening in Watts to grow!

If you want to learn our strategy for Watts and a simple way YOU can develop rhythms for creating movements for the gospel, read on… 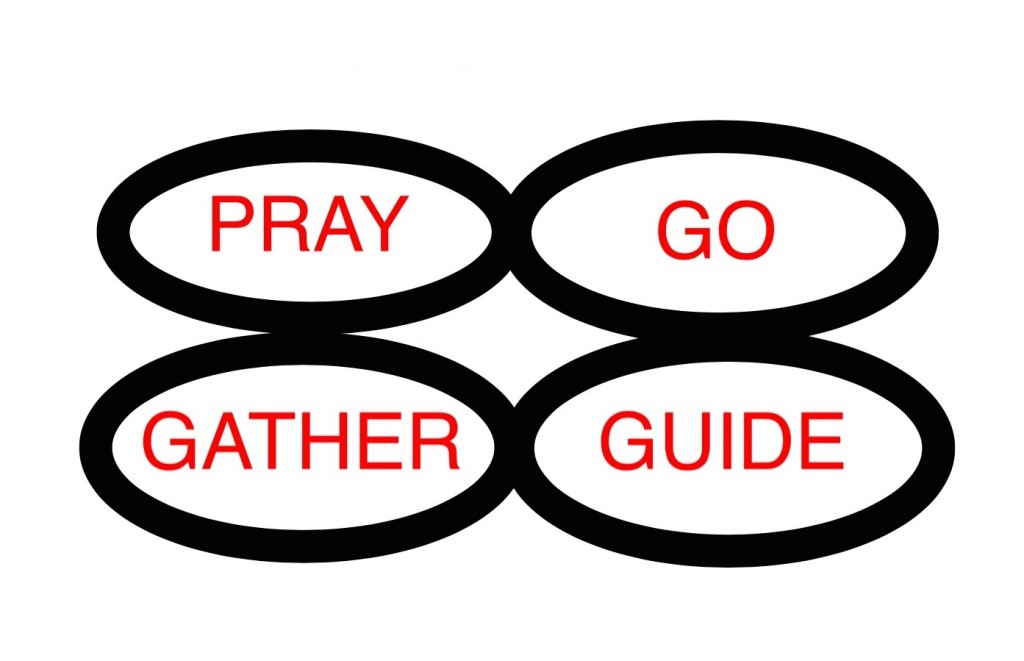 In every place you implement these rhythms, it’s up to you and the Holy Spirit to creatively adapt HOW you’re going to implement that rhythm for your context. You can print out this above picture, then dream with your team as you fill in the circles for specific ways to implement that movement rhythm.

Everyday, we gathered to [PRAY]. The time in God’s presence was refreshing and God often gave us practical inspiration and creativity for the day.

Everyday we went out and walked the streets [GO]. We met people. We knocked on doors. We got to know people’s names. Often, we’d be invited inside their homes. Often times we Christians seem to be better at inviting people to COME than we are at obeying Jesus’ command to GO. It definitely takes a little creativity and courage to change, but anyone can relearn this valuable rhythm Jesus taught us.

“Hi! We’re walking around today praying for the community and praying for God’s peace upon people’s families and homes. May we pray for you?”

When we prayed for them, we often shared a short presentation of the Good News of Jesus. You know, in simple form. We’d say something like:

“Have you ever heard how we can align our hearts with God and experience His greatest blessing?

God created the world and everything in it. But early in the history of the world, people became separated from a close relationship with God. People turned away from God and evil entered our hearts. Evil has been expressed in the world ever since. But God loved us and didn’t want to leave us alone. God sent Jesus into the world. Jesus was born to a woman named Mary, who was a virgin. Therefore, he was called the Son of God because he didn’t have any evil inside him. He was perfect and holy. When he got older, He showed people what God was like. He healed the sick, cast out demons, and taught people that God wanted to become their Father. He taught us that God wanted us to live in close relationship with Him, both in this life and in heaven forever. But then evil people murdered Jesus on a cross. But he was SO powerful that death couldn’t hold him! Three days later, he raised from the dead and went up into heaven! He sent his followers on a mission that continues today to spread the Good News – Anyone who believes in Jesus will receive three wonderful things:

Would you like to receive these wonderful gifts from God today?

Then, we would personally pray with people to repent and believe the Good News of Jesus.

Over 70 people prayed to begin the journey of following Jesus. But we didn’t leave them there. Sometimes, people had immediate needs like sickness. We followed the command of Jesus in Luke 10 to heal the sick. Some people we prayed for experienced healing. Others didn’t. We didn’t worry about that. We prayed in faith, leaving the results to God.

We started friendships with people and asked when we could [GATHER] with them again and also meet their friends and family. We set up times with people to come back and do more experiences with Jesus.

We use my Pocket Disciple booklet to [GUIDE] these groups of new believers in how to grow with Jesus together and spread the message of Jesus to their friends, family, and neighbors.

Any follower of Jesus can make disciples. Pray, Go, Gather, and Guide.

Jesus worked hard, adapted creatively to needs of the moment, and loved well. He shows up to change lives when we’re willing to do the same.