So this happened last night in England.

I was eating a burger in a restaurant in Birmingham, UK with a friend from Budapest. 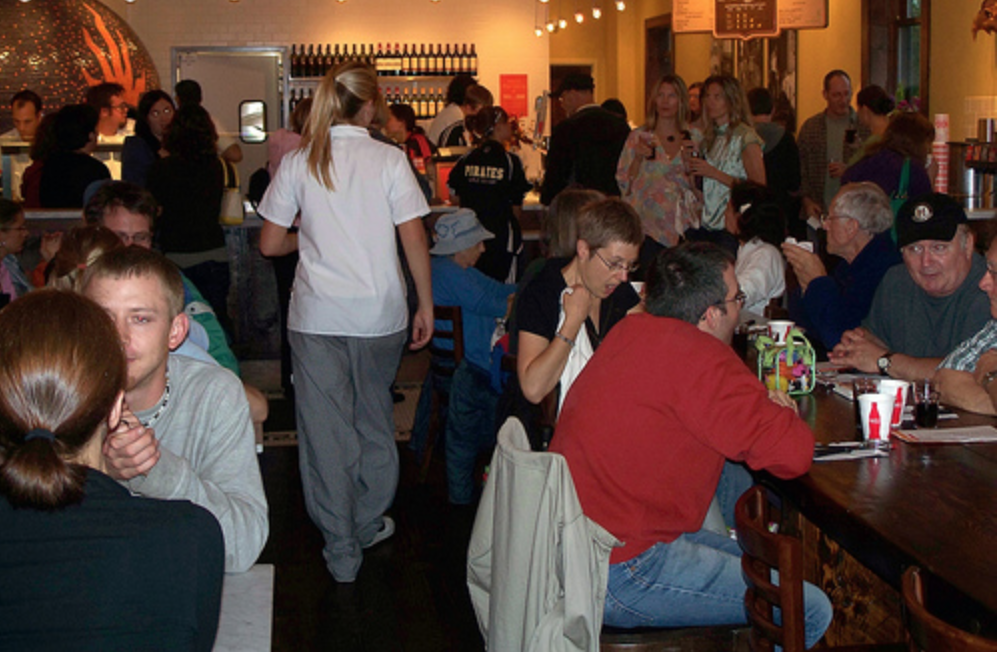 I was just relaxing. Ready to head back to the States after speaking for three days at a NewForms Gathering for leaders around Europe.

The restaurant was pretty full. We were packed into a small table about 18 inches from the people to our left. Music was playing. I was enjoying the sights and sounds of the multiethnic atmosphere typical of a European setting.

We ate our meal and were ready to head back to our hotel. After a quick stop in the bathroom, I walked out to see my friend talking to our waitress, Kizzy.

I heard him ask,

“So if you could ask God for something, what would you ask him for?”

Kizzy reflected on the possibility of actually talking to an invisible God. A spiritual conversation started. She was quite curious and friendly.

After some back and forth, I asked her,

“Has anyone ever told you why the story of Jesus is called good news?”

In the beginning, God made everything. The world, the galaxies, people. Everything.

God and people had a close relationship. And there was no evil in the world.

But one of God’s created beings rebelled against God. He was called satan.

He tricked the first people into turning from God and aligning their will with his.

As a result, people’s close connection with God was severed.

Evil started increasing in the world.

What are some examples of evil you see in the world today?

Yeah, totally. It’s not hard to find examples of evil. That’s not the kind of world God envisioned when He created it. Anyway…

People retained a distant memory of the existence of God, but we lost our close connection to him.

But God didn’t give up on people. He still loved us. God loved the world so much, that at just the right time in history, God visited us. He became a human being in the form of Jesus.

He was a very special baby because he didn’t have any influence of evil within him. He was born supernaturally from a woman named Mary who was a virgin. So he was literally called the “Son of God.”

When Jesus was on the earth, he loved unlike anyone had ever loved.

He spoke unlike anyone had ever spoke.

He healed the sick. He cast out demons.

Jesus told us that God was building an eternal kingdom. It’s starting on the earth and would grow to last for all eternity.

Jesus showed us what God was really like – a loving Father who wanted to bring people back into a loving, close connection with himself.

But evil people rejected Jesus. Though he had done nothing wrong, they killed him.

He told his followers before he died exactly what would happen. He told them he was actually sacrificing his life to show people how much God loved them. But Jesus was SO powerful, that even death couldn’t stop him. After three days, Jesus came back to life!

He then went up to heaven, promising that one day he would return. Right before he left, he told his followers to go into all the world – to every single family and ethnic group and tell this story. For everyone who believes this story, Jesus promises them three amazing gifts.

So, that’s the good news of Jesus. I heard this good news when I was 20 and it absolutely changed my life. I’ve been telling this story everywhere I go so others can experience it, too.

Would you like to believe this good news and receive these three amazing gifts from Jesus?

Kizzy said she wanted to follow Jesus. She started crying.

We led her in a prayer to repent (repent means to “change your mind” about God, your life, your past, present, future — everything) and believe in Jesus.

A beautiful smile spread across her face.

But Jesus was just warming up.

“Who else do you know who needs to hear the good news of Jesus?”

I thought she’d think about it and maybe go home and tell someone later.

Instead, Kizzy pointed across the restaurant and said, “She does.”

She went and got another waitress, named Maizy.

Maizy heard the good news. She prayed with us to begin following Jesus.

We asked Maizy the same question:

“Who do you know who needs to hear what happened to you?”

Maizy went behind the bar and grabbed Skyler. She told us,

“I’m not religious but I’ve been thinking a lot about God lately.”

We (with the help of the other two girls) told Skyler the good news of Jesus.

Kizzy assured her, “I just gave my life to Jesus. It’s amazing, you should totally do it.”

Then Skyler gave her life to Jesus.

Amazingly all the customers had left the restaurant by this point. The music seemed quieter. The atmosphere was like an open heaven. I felt like an athlete “in the zone.” Surrounded by a Presence that defied natural ability.

We proceeded to pray for all three to be baptized in the Holy Spirit. The apostles often did this with new believers. I usually do the same. (Acts 8:14-17; 19:1-7)

The other restaurant workers were staring at us; bewildered, but kind of intrigued.

Kizzy looked up and said,

“This is the craziest thing I’ve ever felt in my life!”

Two of them had the same vision from the Holy Spirit.

I was so excited by this point I instructed one of them to go get some water because I was going to baptize them. We baptized them over the bar with a cup of water.

Kizzy helped baptize Maizy and Skyler. I thought this was a great training opportunity. 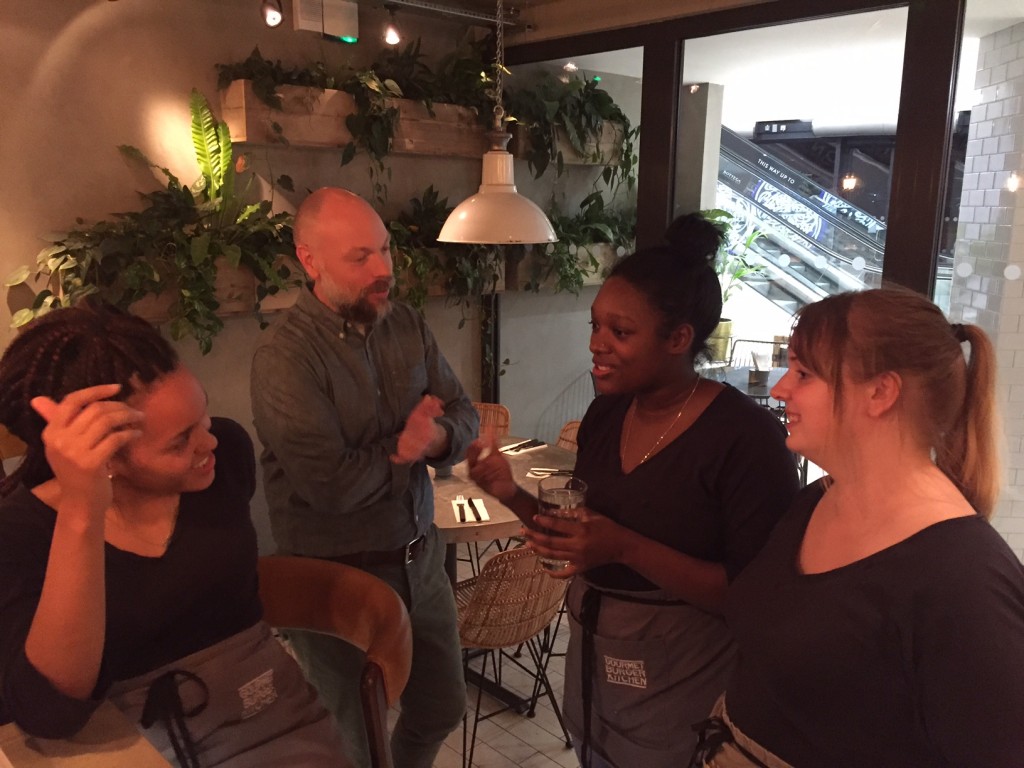 They were beaming with joy. Kizzy said,

“So I can tell people I’ve been baptized now!? Wow!”

“Yes! You can tell anyone you want!”

Some might say, “Why didn’t you fully immerse them?”

Waiting would not benefit them. They were ready. (And they wouldn’t fit in the sink.)

They experienced the Change, Water, Fire, and Tell experiences all in the course of about 30 minutes! This was their introduction to the Jesus way of life.

We met with them later that evening, gave them a Pocket Disciple, exchanged numbers, and commissioned them to reach the rest of their co-workers with the good news of Jesus. 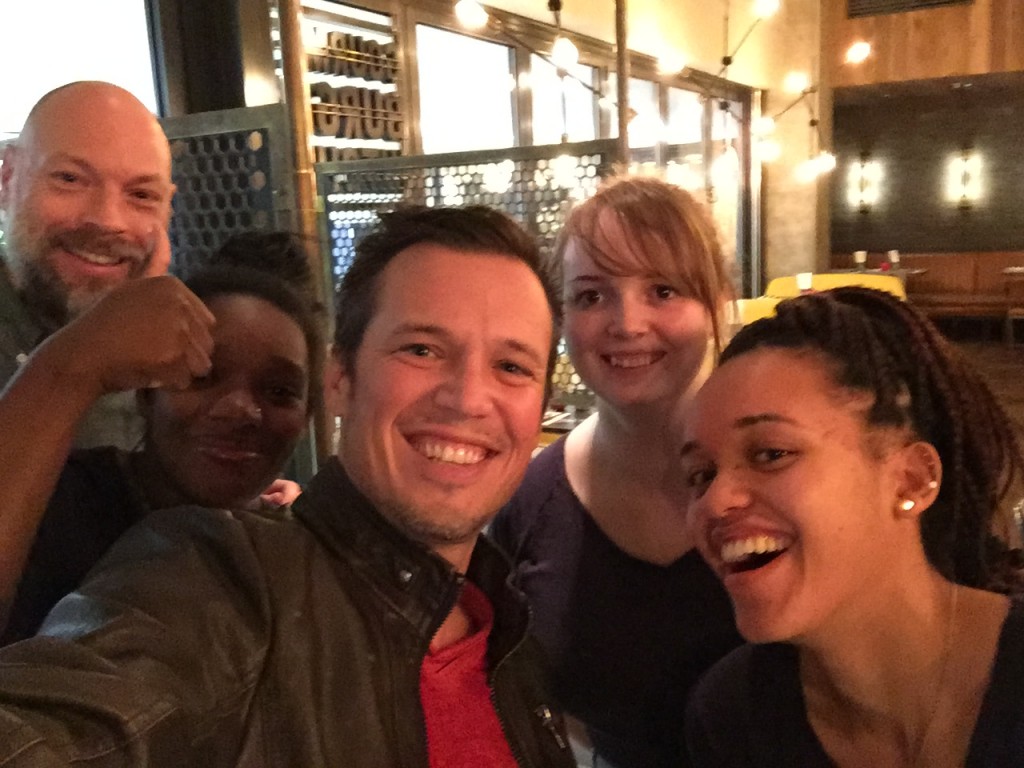 The story of Jesus WORKS.

Within the story of Jesus is the seed that changes the world.

And the story lives in YOU. Go TELL it!

p.s. Do you want to share the good news of Jesus but feel like you get stuck? Here’s a great exercise to help you: