When You Know Too Much About Jesus (and why our evangelism sucks)
October 25, 2016
Evangelism
Erik Fish | evangelism | Pocket Disciple

I read an article today entitled, “The Curse of Knowledge.”

A lightbulb went off.

Teachers suffer from it.

Salespeople suffer from it.

Business Professionals suffer from it.

Christians suffer from it, too.

Some of us know a lot about Jesus. But we have been “cursed” with an inability to talk about him with others in meaningful ways.

“What is “The Curse of Knowledge?”

If you’re “Cursed,” then you are unable to imagine what it’s like not to know or understand something — a topic, discipline, craft, what have you — which, in turn, makes it hard to communicate that knowledge (aka evangelism) to less-informed people.

In their book, Made to Stick, the Heath Brothers provide a typical example:

Think of a lawyer who can’t give you a straight, comprehensible answer to a legal question. His vast knowledge and experience renders him unable to fathom how little you know. So when he talks to you, he talks in abstractions that you can’t follow. And we’re all like the lawyer in our own domain of expertise.” *

I’ve seen it over and over. New followers of Jesus often lead a lot of their friends to Christ. Someone who’s been following Jesus for a while doesn’t. Why?? They start to develop a new language and a new culture. Too soon, they forget how to simply talk to people about Christ in ways others understand.

They’ve been afflicted with the curse of knowledge.

Does that mean we shouldn’t learn? Of course not! Part of the journey of following Jesus is to ALWAYS be learning. But part of that learning means getting back to loving and relating to people who don’t follow Him yet.

This morning, I was on my way out to record some podcasts. I saw a young man walking through our apartment complex. He was a tough looking guy with lots of tattoos. Seemed like a guy who was street smart. I pulled over and offered him a ride. (Honestly, I’d seen him walking around outside our apartment, so I also wanted to get to know him and “feel him out” to discern if he was a safe person since my kids often play outside).

As we rode together, I asked about his tattoos. (Tattoos are great conversation starters).

“This one is in memory of my mom. She died a year ago. This one is about…

He told me about his dad who he’s never met and is in prison. He told me how he’s been with his current girlfriend for four months. Then he tells me how his ex girlfriend recently gave birth to his first-born son.

“But I’m trying to get my shi* right, because my life’s been pretty messed up.”

Me: “Yeah, man. I feel you. I never had a relationship longer than four months until I met my wife. You know, I never thought I had what it took to live a good life and raise a family. I used to run around like crazy. I was pretty messed up. But then I met Jesus and started a relationship with him. He helped me turn my life around. Now I’ve been married for 15 years and have four amazing kids. You ever heard about how to start following Jesus?….”

My point is this. Sometimes we get so full of Bible knowledge. Explanations about the trinity. Doctrines about God’s sovereignty and predestination. Why God’s people fought wars in the Old Testament. Bringing people to church because we can’t explain the gospel as well as the preacher. Some good things, yeah, but influencing others to follow Jesus is SO much more simple. Many of us have forgotten how to talk with people. We suffer from the curse of knowledge – making following Jesus too complex and mysterious for the average person who’s never heard how to follow him.

I coach a number of people in evangelism and church planting. Once I was coaching a girl who wanted to start a church on her campus. She was super motivated, but her head was full of knowledge and theories. She wasn’t winning anyone to Jesus. I told her,

“Throw out the theories. All I want you to do for the next month is get on a first name basis with ten people who don’t know Jesus.”

“Yep. Disciple making happens by actually getting to know people. You skip that, you miss out on everything else.”

Within a month, she’d led 8 new people to Jesus and started a church with them.

So here’s a simple challenge. Meet someone new. Talk to someone in class or at work. Ask them some interesting questions to get to know them.

Get conversations going. Learn about them. See where it goes. The plan of God for the world flows through genuine relationships and meaningful conversations with one another. Crazy, right?

Don’t give in to the “Curse of Knowledge” that paralyzes you from the process of finding out where people are. If you start getting to know people who don’t know Jesus…

This is my passion. Helping YOU become the greatest disciple maker you can be in YOUR sphere of influence. Believe in yourself, because Jesus is in YOU! He became a human being to announce the kingdom of God in ways we could understand. We can do the same!

Don’t think you could ever guide someone else in the journey of following Jesus? Think again – Pocket Disciple will get you started. It’s a simple guide for growing relationships centered on following Jesus together. 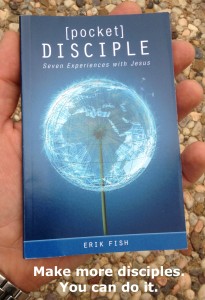 Pocket Disciple guides you and some friends through seven transforming experiences with Jesus.

Carry on friends. We’ve got a whole world to explore with Jesus.