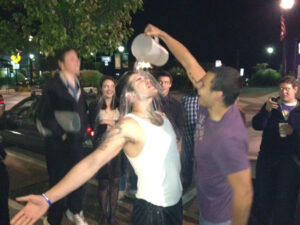 At 20 years old, Dustin had enough of the broken relationships, heartbreak, and lost dreams. He’d lost his football scholarship. He’d lost his girlfriend. He’d lost his job. He’d lost his relationship with his dad. Dustin found the last stash of drugs and laid a massive line on the table. He reasoned it was easily enough to end the pain of his earthly life. Permanently.

Then the phone rang.

Dustin had a friend named David. David was an NYU student and a rapper rapidly ascending the ranks of the underground circuit in New York City. He encountered the Holy Spirit and left the drugs, sex, and fame to spend a year at the Antioch Overflow Experiment, a HUB outside Pittsburgh for the SCPX family. One night, God brought his old friend Dustin to his mind. He picked up the phone and called him.

“How you doing?” David said.

Tears began to pour on the table in front of Dustin, next to what would have been his suicidal last line of drugs.

The conversation went on. David prayed with Dustin. As they talked on the cell phone, Dustin stepped outside his house, walking away from the death that lay on the table. Beside a trash dumpster outside his apartment complex, Dustin fell to his knees and surrendered his life to Jesus.

David and his friends Ryan and Blaze began to walk with him and teach him how to grow as a follower of Jesus. He was filled with the Holy Spirit. That first week, Dustin received recurring dreams from the Holy Spirit about his call to tell others about Jesus and bring them into God’s kingdom. This weekend, when I visited the AOX base in Pittsburgh, I spent the weekend building a relationship with these young warriors who are spreading the hope, love, and power of Jesus. Here is a picture of David baptizing Dustin.

David baptizes Dustin at the AOX Hub outside Pittsburgh this weekend

When there are no pools of water around, we use whatever we can find 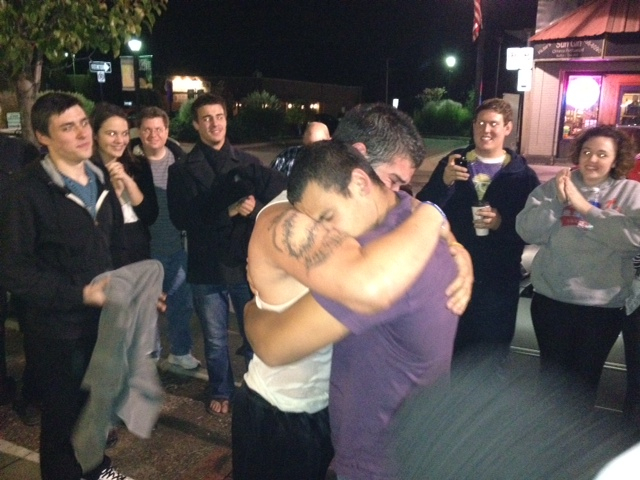 When someone catches Jesus, it’s like a good virus that begins to spread – bringing healing instead of sickness. It’s not about religion. It’s about a powerful relationship with the One who brings new life, both now and for eternity. He’s worth following. Tell someone!