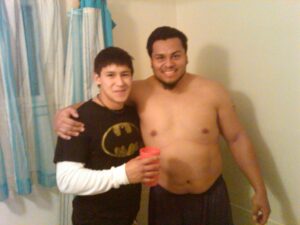 JR and his roommate SG

His roommate had just threatened to kill him when I walked in.

I was at Haskell Indian Nations University. I spend about five hours a week here, discipling student leaders who are growing simple churches that meet in various locations around campus. This year they’ve seen more students meet Jesus than ever before.

A few months ago, I started discipling JR, a student at Haskell. He’s from the Quinault tribe, a NW tribe with a rich history. Early on in our relationship, I asked JR to make a list of ten people who were far from God on his campus.  I do something similar with everyone I disciple – I ask them to immediately be involved in bringing others to Jesus. Long ago, I learned from some good leaders, “there is no discipleship without evangelism.”

The first thing Jesus said to his disciples is, “Follow me and I’ll make you become a fisher of men.” The call to be a disciple of Jesus is a call to start catching others.

One of the people on JR’s list of people to pray for was his roommate, SG.

One day JR told me stories of how his roommate would sometimes manifest demons, praying in demonic languages and cursing him for being a follower of Jesus. He was tormented and would sometimes cry out in his sleep. Sometimes he would say things like “I am death” to other students on campus.

A few days ago, I walked into the dorm to grab lunch with JR. He wasn’t in the lobby where we were supposed to meet, so I walked to his room. His roommate was there with him. I didn’t know it at the time, but one minute before I walked in, they’d gotten in an argument. Words got heated and the roommate said, “I could kill you right now.”

When I walked in, I felt compassion for this kid. Well, “kid” isn’t a very good description. He’s huge. He plays football. I knew his reputation. I was a bit frightened.

I had no word of knowledge. I had no prophetic revelation. But I did have the gospel inside me, ready to speak it any time when it was needed.

I said, “JR and I have been praying for you. God has good plans for your life.”

He got kind of quiet as he looked at me.

“Yes, did you know if you become a follower of Jesus, He’ll break the power of demonic forces off your life and He’ll lead you in the purpose God created you for?”

My faith was stirred for this guy.

“Do you want to change the direction of your life and become a follower of Jesus right now?”

“Yeah. Your life can change in a moment when the power of Jesus comes inside you.”

He paused, pondering my words.

JR and I led him in a prayer. He repented of his sins. He renounced his allegiance with demonic spirits. He believed in Jesus’ resurrection and accepted Him as the Lord of his life. We laid hands on him and prayed for him to receive the Holy Spirit.

Afterward, he hugged us, a big smile on his face.

“I want to see you tomorrow. Before then, I want you to tell three people who are far from God what happened to you and the decision you made to become a follower of Jesus. Will you do it?”

“Dude, I can’t believe what just happened. Right before you walked in, SG and I just got in an argument. He threatened to kill me. The next minute he was repenting of his sin and giving his life to Jesus. What happened?”

The next night, JR brought SG to a simple church he helped start with his friend Bear and me a couple months ago. SG told everyone in the group that he was a follower of Jesus now. We filled up the bathtub and JR baptized him. He is so big, he had to dump water over his head as he kneeled in the tub.

We prayed over him and his eyes started rolling in the back of his head – he was manifesting the demons that had tormented him for so long. We commanded them to go in the name of Jesus. He was set free! Casting out demons was a key part of Jesus’ ministry. Sometimes we don’t know how much people need God’s power until we get close to those who are oppressed by the devil.

As we continued to pray for SG, he started speaking in tongues. Beautiful sounds of praise to Jesus flowed from his mouth as he lifted his hands and praised the God of heaven and earth, the God who has power and authority over all forces of evil.

Pray for SG! There’s a lot to walk out as he continues to grow with Jesus. But, like SG, every person on earth who is far from God is one moment away from the miracle of a changed life.

The last few years, I’ve watched hundreds of simple churches start among university students around the world. God wants the gospel to grow among those who are bound by the works of the devil.

Planting simple churches is about planting the gospel where the darkness is and watching it change lives.

It’s about Jesus sending you to bring the gospel where it’s not yet…and watching the church grow there.

You have the power of Jesus living inside you – the seeds of the gospel you sow can change lives. Sometimes these seeds just need to be sown right where people live.  This is why I love equipping people to plant simple churches – simple, reproducible gatherings of people bringing the gospel, the power of the Holy Spirit, and disciple making into the spheres where they do life — they bring the gospel right where it is needed most.

Simple churches can happen anywhere; a college dorm, a house, an apartment, a fraternity, a coffee shop, in a hookah bar, or over lunch breaks at work. It can happen with you.

Just like JR, I challenge you to make a list of ten people who are far from God. Start praying for them. Start hanging out with them. Love them. Sow seeds into their life.  The gospel is powerful! You can do it!